Veterinarians, while focused on the health of our four-legged friends, are in the people business as well. Caring for pets means connecting and effectively communicating with the people who love them. Luckily, Dr. Owens is as good with people as he is with their pets. 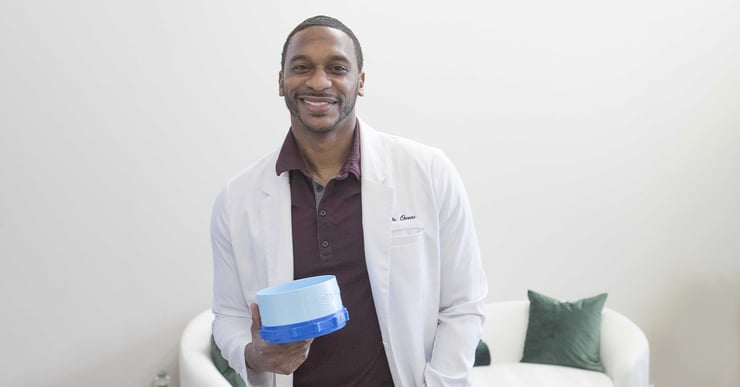 “Most people think I’m related to Jesse Owens, the track star. Unfortunately, I’m not,” he says with a laugh.

“My mother’s a veterinarian … she is Tuskegee class of 1980,” Dr. Owens remembers. “She was my hero growing up, watching her save animals. We had rabbits, multiple dogs, cats, so I kind of lived in that environment.”

Though Dr. Owens grew up in a veterinary family, he didn’t let that predetermine his life’s path.

“My father always taught me to be your own business owner, [and] own your own stuff. So, I kind of kept that concept … I looked into architecture. I couldn’t draw, though,” he says with a chuckle.

While searching for his own way, Dr. Owens explored a number of career options, including a stint at a veterinary clinic in his late teen years.

“I was kennel for my first veterinary clinic, and I hated it,” he remembers. “I hated it … but then I kind of found my way back. It was like fate just kept calling me. I had an interview my senior year in undergrad with a pharmaceutical company, and I didn’t get the job. For some reason they were telling me, ‘You really mentioned veterinary school, veterinary medicine. I think you should go pursue that.’”

Turns out, that interviewer was on to something. Once Dr. Owens found his calling, everything started to fit into place.

“I found myself at Tuskegee University in Alabama for eight years. I got my bachelor’s degree in animal science in 2008, and then in 2012 [I received] my doctorate in veterinary medicine. Then, I had an externship in Las Vegas, and it was amazing,” he recalls. “I got excellent experience, and I found a good mentor and a facility that worked for me. I’ve been over there in Vegas ever since 2012.”

For Dr. Owens, the veterinary sciences matched well with his personal drive and entrepreneurial spirit. Now, he co-owns two daytime practices and an emergency hospital, all in the Las Vegas and Henderson area, plus a pet-related venture known as Enjoy-A-Bowl. 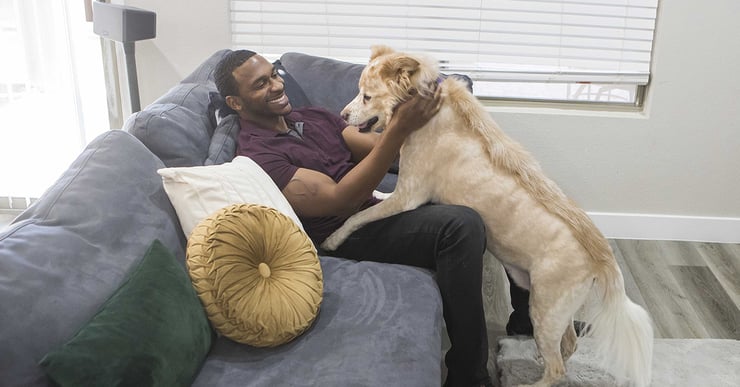 Loving our pets to death

“The thing they don’t teach you in vet school,” Dr. Owens says, “is the things that people do to [their] animals that [they] have no idea they’re doing. My job as a vet is to relay messages that these pets can’t tell you about on a day-to-day basis.”

He adds, “Things that you would think are normal, unfortunately are far from normal.”

The domino effect of dental disease offers us one very common example. Many dogs and cats will respond to the pain of infected teeth and gums by resisting food for a few days or weeks. Not long after, pet parents will do anything to get them eating again.

“The first thing Dr. Google tells me is [serve your pet] chicken and rice,” Dr. Owens says. “Now, the pet’s miraculously eating. But why is that? Well, not because it’s chicken.... It’s because it’s a softer food on my infected teeth and gums.”

In time, that short-term fix to one problem becomes a regular diet that leads to a host of other health issues. According to Dr. Owens, malnutrition from a chicken and rice diet can “cause pancreatitis and diabetes, obesity—everything you and I would get from eating unhealthy foods.”

Then, there’s the way that our habits tend to slide into convenience.

Meanwhile, our pets give us unquestioning love, no matter how they feel. Often, the signs of pain and discomfort are hidden underneath their joyful exterior.

Dr. Owens says, “[Your] pet’s still wagging their tail, and they’re loving you. You come home, and they’re for you—Oh, my God, Mom’s home. I love you so much—licking your face. So, how can you take that for pain or suffering or even chronic neglect?”

Pets are a part of the family and, as a result, people often build strong bonds with their vet. That can make tough conversations about pet care feel very personal.

“I had a couple cases where diet was the biggest issue, and I’m talking to older women who—their family’s gone,” Dr Owens recalls. “They might even be widowed. They have no kids anymore in the house.”

He continues, “They want to cook for their animals, and that’s when the problems happen: vomiting, chronic diarrhea, obesity and then the lameness.… When that happens, it’s hard to have that conversation.”

Tensions are heightened when the pet resists eating the healthy, vet-prescribed food they need to thrive. Add in the conflicting advice pet owners get that undermines healthy choices recommended by their primary vet, and you get a tough situation.

Veterinarians often end up looking like the bad guy, the killjoy. After several difficult back-and-forth conversations with pet owners, Dr. Owens knew he had to find a better solution. 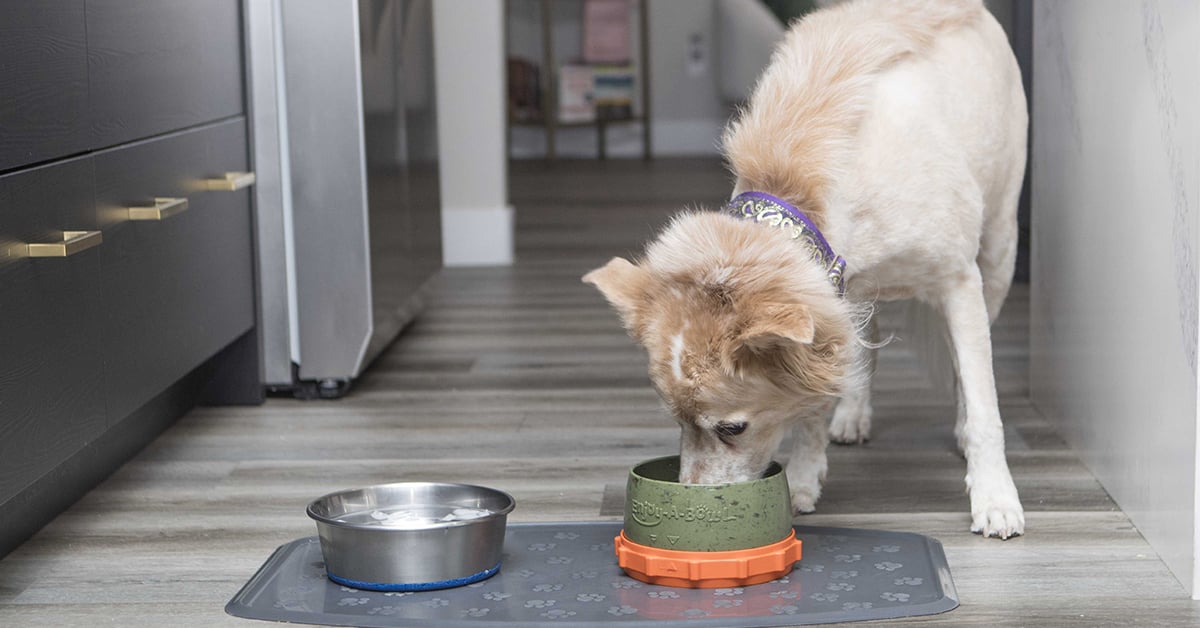 Inspiration, as it often does, came unexpectedly—in the form of some exquisite Italian takeout.

“But he’s sniffing it, sniffing it—and then goes to his bowl and just starts tearing it up,” he remembers. “Just like ‘Okay, thank you. I just needed to feel that, so I can bring it to my bowl and be right by this meal. I just needed something different, Dad.’ And that’s when the light bulb came on.”

In that moment, Dr. Owens had an idea for a new way to correct bad eating behavior. He continues, “So I got a pencil. I mean, I was just going to town on a paper towel, writing ideas. I must’ve drawn twenty concepts, then wrote a patent and got that approved. The whole process was challenging, but that was a eureka moment.”

After testing several prototypes with Q and the pets of friends and colleagues, Dr. Owens came up with a three-part bowl with a sealed bottom compartment for the pet’s favorite unhealthy foods. Once assembled, tasty aromas vent up through a protective layer and into the veterinarian-approved diet—making it smell doggone delicious!

Seeing early success, Dr. Owens offered his new Enjoy-A-Bowl to a patient in dire need of a change.

“She was a 12-year-old German shepherd. Her teeth were very diseased, she had a head tilt. She was almost going senile, but [her family] cooked her everything under the sun. The dad told me they would cook on the grill—chicken, pork chops, steak. This dog eats better than me! Then, when she didn’t eat some of that, they would cook a slab of ribs, everything.… If she didn’t eat in a day, he would just throw some Lawry’s seasoning on, too. And I’m like ‘Woo … we got a long way.’”

Getting a dog to eat prescription kibble after a decade of luxurious eating is a mighty feat—which is why Dr. Owens’s client was unsure she could get her dog on board. That’s when he tried out an early prototype of the Enjoy-A-Bowl.

“So, we tried out … my first prototype,” Dr. Owens says. “And she sniffed and just went to town. Parents were crying. They were like ‘Oh my God. It’s amazing.’ I was 100 percent skeptical. I did not think this was going to work.”

Dr. Owens realized he had a transformative new tool on his hands.

He continues, “I’ve had other success stories like that as well—the owners tell me, ‘I got a brand-new dog and she won’t eat this [food].’ And I know better. So, I bring this bowl with me everywhere I go.”

After years of pushing back on pet parents who couldn’t or wouldn’t change their pet’s eating habits, Dr. Owens knew he had a valuable teaching tool to get pets to eat their vet-recommended food. Furthermore, pet owners who wanted to pamper their pets still could—all without breaking a healthy eating regimen. 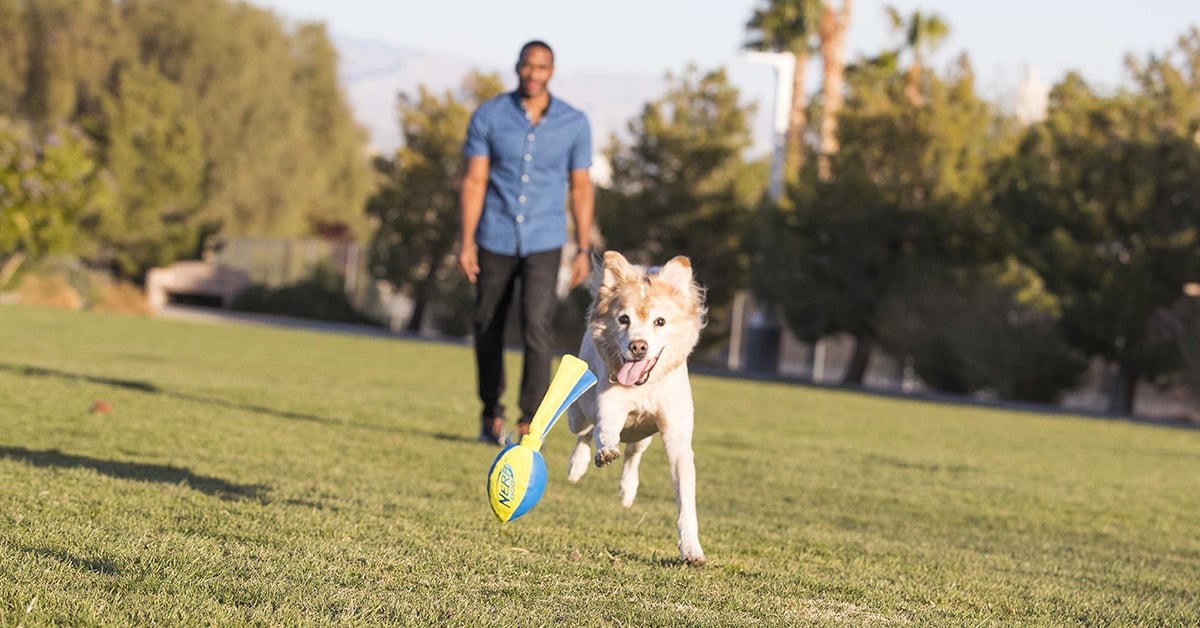 When our pets can’t communicate their pain, veterinarians have to step in and speak for them. According to Dr. Owens, those conversations go much better when his clients have pet insurance.

“I’m a person, too. I’m a human,” he says, reflecting on hard conversations he’s had in the past. “I can’t love your pet more than you. If I cared for everyone’s pet as if they were mine, I would have a zoo. I would just take everyone’s pet [that needed care] but it’s just reality—they’re your babies, they’re your responsibility.

“As a vet we get pushed into these corners of necessity… but those conversations with pet owners who have pet insurance—Nationwide pet insurance in particular—are just night and day. Everyone’s happy. I’m not the bad guy.”