2020 was a very tumultuous year for most people. For Shauna and Spencer, it was one that brought about more change than expected.

“I spent twenty-six years in northern Virginia. Last year, during the start of the pandemic, I temporarily relocated to Las Vegas,” she says. “So, that was an exciting change during a strange time, [but] I found myself feeling a little lonely.”

Adapting to her new setting at a time when connecting with new people face-to-face was all but impossible, they decided to follow through on a dream.

“My boyfriend and I, we had been kind of talking about getting a puppy for some time—so I am one of the many folks that decided to get a pandemic puppy. So, that’s how I got Pongo,” she explains. 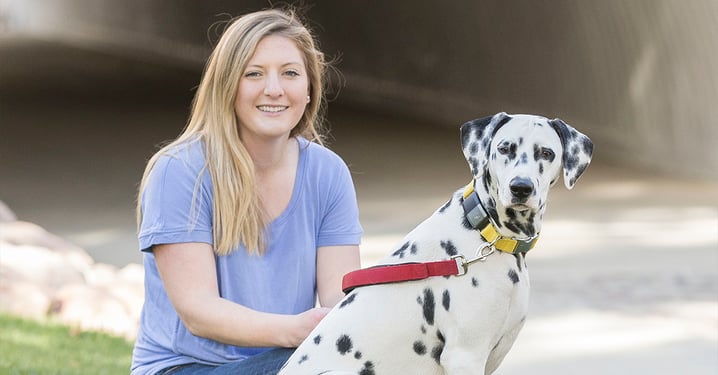 When the couple imagined their future pooch, they didn’t have a Dalmatian in mind.

“Back when we were in Virginia, we talked about getting a Bernese mountain dog,” she recalls. “But when we moved to Las Vegas, getting a Bernese became a lot less practical … it probably wouldn’t be fun for them to be in 120 degrees with 100 pounds of fur.”

So, they started their search in a new environment with a new climate—and a new vision for their ideal pet.

“We started looking for some short-haired animals … I remember one day I saw an e-mail from one of the local communities here saying that they had a Dalmatian puppy. I was like ‘Oh, he’s cute, but we don’t want a Dalmatian.’”

Still, something about this spotted little guy in the email spoke to Shauna. They decided to go meet him regardless.

She continues, “[We said] ‘It’s fine, whatever. We’ll just go look, and we’ll play with him, and it’ll be fun.’ And then, of course, love at first sight … so not exactly the most informed decision-making, but I wouldn’t have done it any differently. I mean, Pongo’s been the perfect pet for us.” 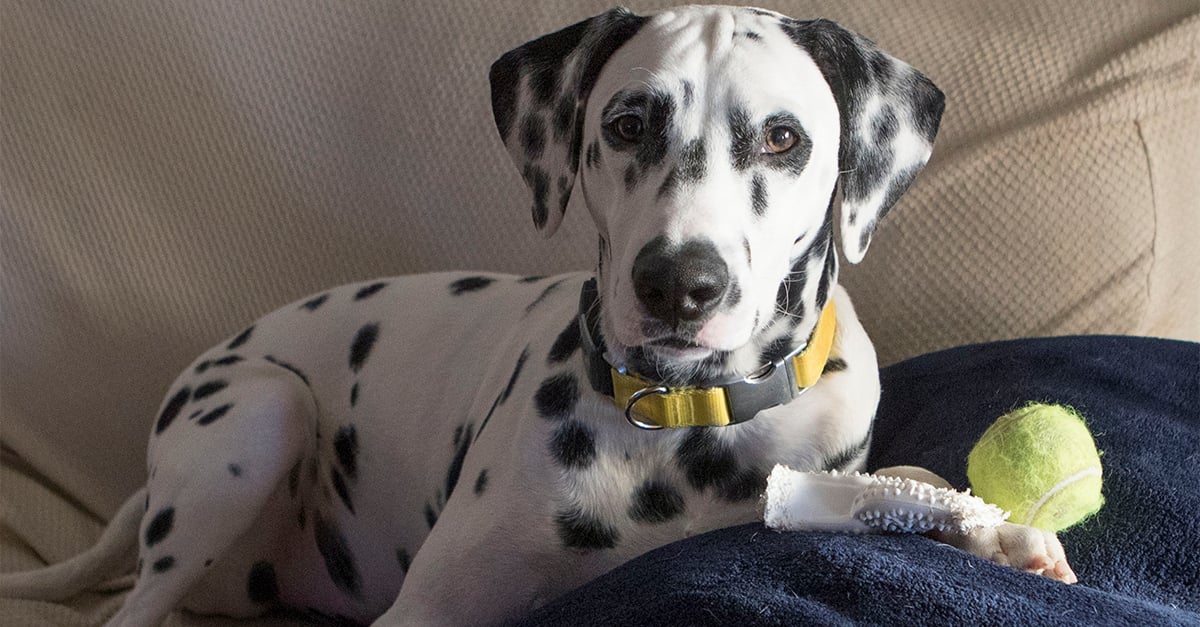 An instant connection like the one Shauna and Spencer felt changes things—and quickly. When they picked up little Pongo, they hadn’t really lined up everything they needed just yet.

Shauna explains, “We had talked about getting a dog, but we had no supplies. We had no plan, but the good news is that we are both pretty aggressive type-A people … so this was a nice kind of way to succumb to [becoming] a type-B person for once.”

The first challenge the new pet parents faced was getting everything they needed for night number one. The pandemic didn’t help much.

“The first night was definitely a scramble. We picked him out—it was probably about 7 o’clock [at night] when we left … [and] in the height of the pandemic, pet stores were closing at like 7 or 7:30. So, we jetted a bunch of different places to gather supplies. By the second day, we were much more prepared pet parents.”

Though excited about the prospect, Shauna was very new to the idea of caring for a puppy.

“[Getting a dog was] definitely new territory for me—I had hamsters growing up. The needs of hamsters have been very different than the needs of my Dalmatian,” she laughs. “Spencer, he had dogs growing up, so he was much more of the experienced caregiver. I’d like to say that I’m just the natural caregiver. It just came to me, right?” 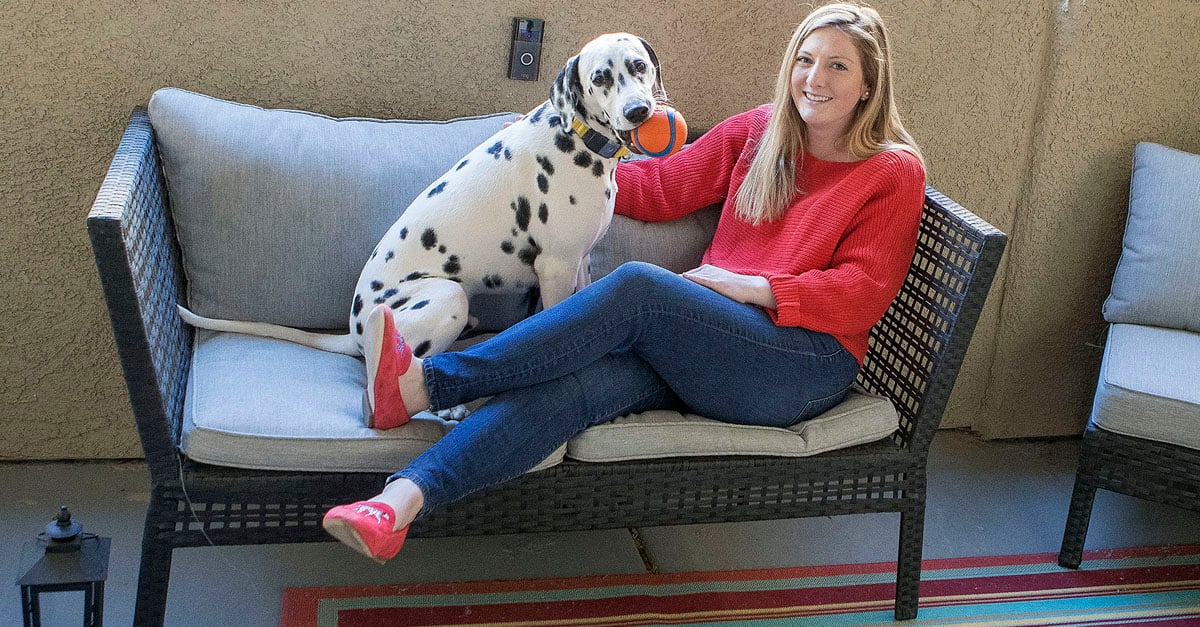 The couple had made a snap judgement when choosing Pongo, and now they wondered: Are our instincts right about our new pooch? Fortunately, he was as friendly, playful and engaging as they had suspected—“Mr. Personality,” as Shauna puts it.

“I think the first time we were like ‘Oh yeah, we picked the right dog’ … [was when] we took him to the dog park,” she says. “We were talking about how this was going to be the deciding moment that we see what kind of dog he is. Like, is he the dog that hangs out in the corner?

She continues, “It was so funny because he … did a full patrol of the dog park … checked everything out, [and] was like ‘I’m good, I’m staying in here.’ And then he just gunned towards this group of labs. The labs were kind of uncertain, like what’s this puppy doing? … But, instantly, a game of chase broke out, and Pongo was loving it. He’s very high energy, and he likes being the ringleader of the chase.” 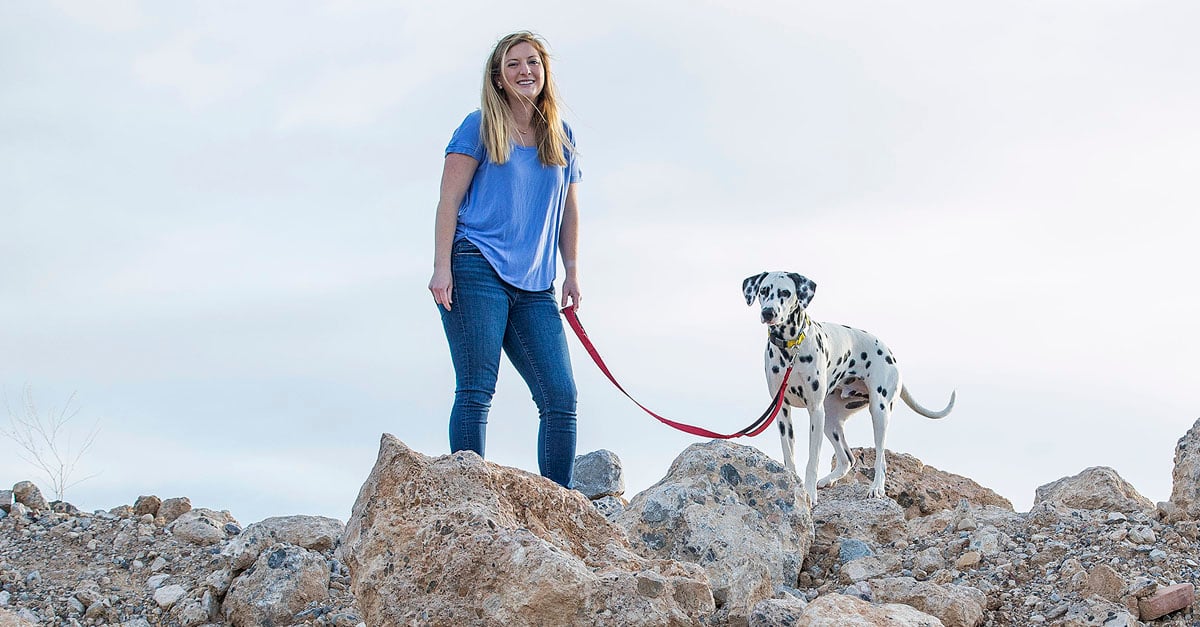 Call of the wild

Shauna and Spencer quickly adjusted to their new family. Like many people last year, they decided to break out of their homebound pandemic routine by jetting out into nature for a long weekend. That’s where they experienced their first real fright.

Shauna recalls, “The first medical scare—we had driven from Las Vegas to Yosemite National Park in California … there’s a part of Yosemite that you can take your dogs to. We walked him around and he stayed with us on that campsite—and it was great.

“But right as we’re [getting ready] to leave, he started looking a little wobbly. We were like ‘Wow, he needs water, something’s not right.’ And suddenly he just started giving us a little doggy vomit, which was really traumatic for me—as you learned earlier, I’m a first-time pet parent.”

Shauna closely observed Pongo to make sure he was okay.

“I was like. ‘Oh my gosh, we need to go to a vet right now!’’ she remembers. “And Spencer was like, ‘It’s fine. This is obviously not good, but we’ll see what happens. Maybe it’s just a one-time thing. He could’ve eaten some grass or something else that caused his tummy to get turbulent for a second.’ But then he threw up again, and he was like, ‘Okay, we’re going to the vet now.’”

Unsure and dealing with a number of intimidating variables—a new pet in an unfamiliar part of the country—Shauna and Spencer phoned a friend: Nationwide’s vethelpline®.

Shauna says, “On the drive to the vet, we’re on the phone with [vethelpline®] like, ‘What do we do? This is our first emergency.’ And we got coaching to help us remain calm. [Our pet expert] assured us that [Pongo] would get to the vet, he’s going to get seen, and we’re going to be leaving with a solution.”

This peace of mind made a frightening situation tolerable, and prepared Shauna and Spencer for what they could expect at the emergency vet.

“[He was] able to help us get the information we need and understand the topic better … these are not things that I’m an expert in, so it’s really nice to have a team that’s reliable,” she says. 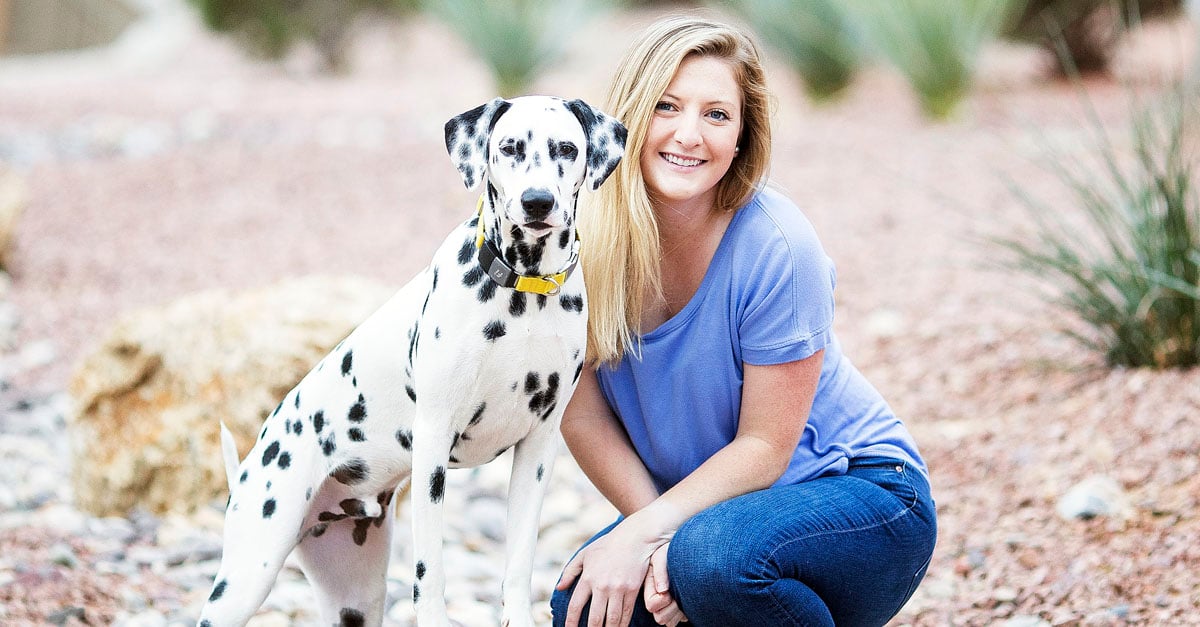 When the unexpected happens

Shauna, Spencer and Pongo arrived at the local emergency vet shortly after their call.

Shauna says, “Our first real medical visit was in a place that we weren’t familiar with right outside of Yosemite, and we drove to the emergency hours. [We] had this fabulous vet there [who saw him and said that] he probably did eat something at the campsite, something unfamiliar to him.”

Unsure of what upset Pongo’s stomach, the team at the emergency clinic gave him fluids and kept him for observation. The veterinarian said that a lot of pets in the area come in after licking up pinecone sap—a big offender. She said others will also come in for eating insects, and just normal things found in nature.

The experience was unnerving for the couple, especially for Shauna. Thankfully, Nationwide was there to help support them.

“[The] first time was definitely a huge scare, but we were really happy to know that we had Nationwide to just basically coach us through the process,” she says. “I mean, it was a traumatic experience with a good outcome.” 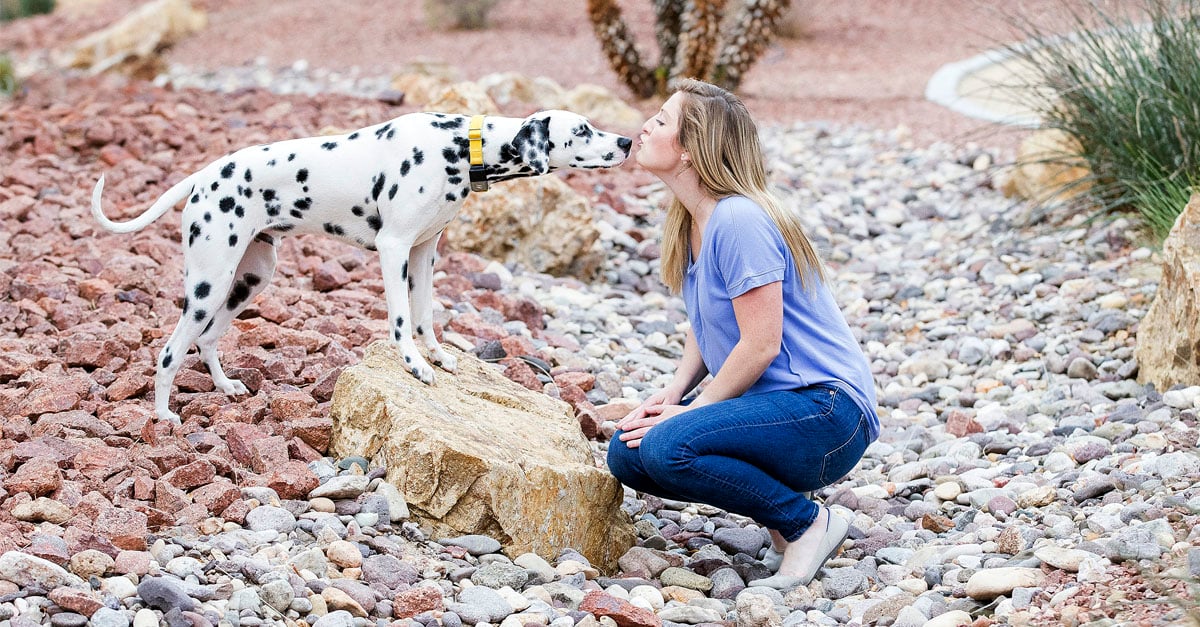 Getting pet insurance was always a part of the plan, even before Pongo came along.

Since this first instance, Pongo has had a couple other health scares—giardia, a polyp and an ingestion incident involving some abandoned cannabis on the sidewalk. Every time, Nationwide has been there to support Shauna and Spencer. 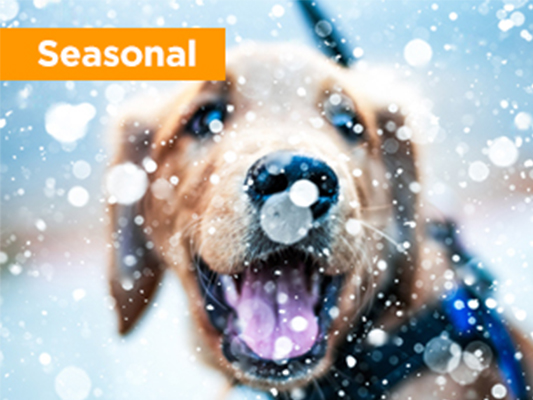 Help friends and loved ones with pets enjoy the paw-liday season safely with our e-card.
Pet stories

Meet Tully, a friend who's fighting back against cancer Tully the French bulldog is one ...

Treat your cat with these tasty tuna delights

December is National Cat Lover's Month. To honor the beauty, smarts and sass of our ...

Give back with the help of these pet non-profit organizations

This holiday season, we’re spotlighting some of our favorite non-profit organizations ...